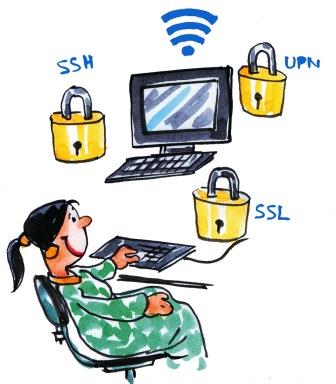 of Wi-Fi devices are sold in the market. Out of these most of the wireless devices are vulnerable in their default configuration mode. Since end users are not fully aware of security levels to be set on these devices, these get rendered vulnerable. By taking advantage of these unsecured Wi-Fi devices terrorists and hackers fulfill their needs.

Anyone with Wi-Fi connectivity in his computer, laptop or mobile can connect to unsecured Access Points(wireless routers).Anyone in the range of Access point can connect to an Access Point if it is unsecured. Once the connection is established the attacker can send mails, download classified/confidential stuff, initiate attack on other computers in the network, send malicious code to others, install a Trojan or botnet on the victims computer to get long term control on it through Internet, etc.

All these criminal acts will naturally be associated with the legal user of Access Point(wireless router). It is up to the legal user of the Access Point to defend himself to prove that he has not been involved in these acts. It now becomes the responsibility of the  user to secure his/her own Access Point.
Lets see some real incidents that took place in the recent years. Terrorists and hackers used unsecured Access Points to perform illegal activities on the internet. Hackers penetrated into open Wi-Fi network of luxury hotels owned by the Thompson Group in New York, Los Angeles and Washington DC and stole the private emails sent by the guests. The hackers then attempted to extort money from the hotel chain by threatening to publish the emails.(www.crpcc.in)

Just 5 minutes before Delhi blasts on September 2008 terrorists used an unsecured Wi-Fi connection of a company at Chembur in Mumbai to send terror emails to authorities and news channels. These hackers do not leave a trail of footprints for the investigators to arrive at a logical conclusion. The audit trail ends at Wi-Fi Access Point of the legal user. So it is becomes imperative for the users to secure their own Access Points(wireless router). The following are the steps to secure an Access Point.

In order to allow authorized users to connect to the Access Point, wireless clients  should be provided access based on MAC address.

Most of the users do not change the default passwords while configuring the Access Point. But it is recommended to keep a strong password, as this default password information can be known from product manufacturers.

Do not broadcast your network name

When the number of users accessing the Access Point is less, it is recommended to disable the DHCP service. As this may make the attackers easy to connect to the network once they get associated with the Access Point.

Hackers try to brute force the password to break the keys, so it is good practice to turnoff  the Access points during extended periods of Non-use.